How many times have you heard about “Combatting Sugar Cravings” or “Reducing Carb Cravings” ?

I’ve heard vegans supporting each other on “Overcoming Meat cravings” -and Hell! -when I was raw vegan I would read in the community forums people discussing overcoming their evil and addictive “Cooked Food Cravings“. 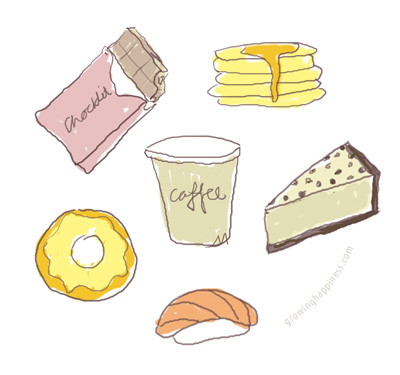 In my post In Defense of Sugar- Part 1 I talked about how I came to believe that sugar was not inherently bad. Here I will go more in depth, and relate it to addiction, cravings and more of the mental components.

Sugar is treated like an evil drug, and any desire for it is feared and shamed. And while it is true that sugar can be used like a drug in binges or emotional eating, it is not inherently evil or bad, and neither is the desire for it. Craving carbs is not a symptom to be squelched.

I am under the firm belief, that food cravings are not a problem unless you have denial or guilt associated with the craving. In my opinion and experience, denial and guilt are the things that lead to overeating and intensified and irrational food cravings, not the food itself.

If there was no guilt attached to a craving, you would eat it, and go on with your day. You would digest it and gain the maximum benefit from the food that your body had been asking for (cookies included). And you’d probably be feeling great!

If you are giving into a craving under the conditions of “Just This Once then Never Again”. Then you will most likely subconsciously fear for your impending lack and potentially abuse it- maybe overeating till you’re sick. Then you blame the problem on the food itself, instead of your disordered relationship with the food. You will also have feelings of guilt associated with eating this food.

But You Swear! You Really Are Addicted to Sugar!

This is what I have come to see that the supposed “sugar addiction” really is:

Eating carbs and sugar is calming and feel-good for the brain. This is normal and natural. If you do not allow yourself to eat carbs regularly, you may find yourself “addicted” to the way you feel on carbs when you give into your natural cravings for them. This may lead to overeating or bingeing. Is this because carbs are bad? No! It is because you are denying them!

Sugar also elevates blood sugar. This is also normal and natural. If you are not used to eating sugar, your body will not handle the sugar as well. It may rise too high. It may rise high and crash, leaving you to crave more. Is this because carbs are bad? No! It is because you are denying them- and not used to metabolizing them.

The more you deny carbs, the more you risk “addiction” symptoms because of the feel-good properties, the body’s ability to metabolize them, and because of abuse due to denial and guilt.

What Does This Mean?

Start eating what you crave.

I do not know what you crave. I would never dream of forcing you to eat cookies or pizza or a rotisserie chicken just because that is what I craved and ate today.

You are the only one who knows what you crave.

Your cravings may not be ‘rational’ but do not discredit them. What you crave is what you need. Not only because your body is probably asking for something quite specific, but also because the longer you deny your cravings, the more insane and intense they may become.

What If You Crave Twinkies? Should You Trust Yourself THEN?!

Do I think that there is great nutritional value to Twinkies? Not necessarily. The reason you crave them specifically and not “cake” is probably psychological. Linked to some past denial or memory from childhood.

But it is a food, and if you crave it, the sooner you start eating as many damn Twinkies as you want, the sooner the Twinkies will likely loosen their hold over you.

The first healing that has to happen is your denial/guilt relationship with food. Only then can you feed the body for the right reasons instead of fear-based reasons, denial reasons or guilt reasons.

So, Should You Be Eating Lots and Lots of Carbs?

While I do not believe that sugar or carbs are villains, and that they are necessary, for example for optimum thyroid function etc., that doesn’t not mean that I believe people always need to be pounding sodas and cakes for their health and well-being. Again, it all comes down to what you crave.

But, I feel very strongly about defending and supporting carbs because:

I think that a moderate, healthy intake of carbs is only sustainable and health supporting if it is coming from your true desires and cravings. Only then will you eat what nourishes you and be happy to stop when you are satisfied. Not out of fear for your waistline and health, but out of true desire.

BUT the only way to get to that point is to allow yourself to heal your relationship with food. Which means allowing and indulging all cravings. Which, may lead you to eating a shit-ton of sugar for a while.

And I want you to be ok with that.